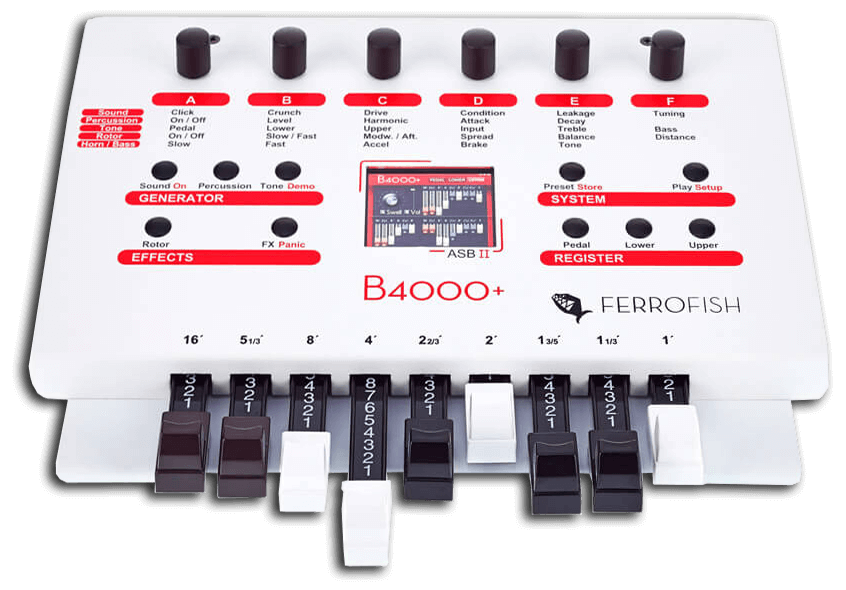 The B4000+ combines the legendary unique HammondTM B3 organ sound with modern design and ease of use. Built like a tank, the tone module features 9 real drawbars. With high-resolution endless potentiometer knobs, a TFT display and full MIDI control, the B4000+ packs the authentic sound of the mighty B3 in a light-weight package – ready to travel around the world in your shoulder bag.

Based on the incredible processing power of a Sharc DSP and a Cortex 3 ARM, all the features of the glorious ancestor have been modeled with the highest accuracy. Starting with 91 tonewheels, including leakage and condition – digital “Clonewheels”. Adding full polyphony, scanner vibrato, tube amplifier emulation with overdrive and – of course – a convincing rotating LeslieTM speaker simulation. Even the notorious key clicks and percussion sounds are reproduced just like in old times.

The B4000+ allows it to connect up to two keyboards via the MIDI ports plus pedal and sustain controllers for the full playing experience. For pedal functionality Ferrofish recommend FC-7 pedal from Yamaha. The integrated Split Mode allows it to split a keyboard for the upper and lower manual on two sections. MIDI data is also transferred via USB. All incoming MIDI data is transferred to the PC via USB and can be recorded in a sequencer.

The B4000+ can feed an external audio signal into the internal effect section, e. g. the rotor and reverb effects. The signal can either be fed directly to the mix or pass trough the effects section.

The perfect and highly affordable solution, if there are keyboards, but no ultra-realistic organ tone module in-da-house.

Hammond organs are towering over the 20th-century music like the ancient pyramids: massive, potent-sounding, an objects of worship, driven to the edge by keyboard wizards.

Since their first appearance in the 1930s, they were not only be used by generations of church organists but in virtually every kind of music style. Originals are still being used around the world by live bands and in selected studios, which are lucky and can afford the necessary space and costly maintenance.

Originally intended as smaller and much cheaper substitute for pipe organs, which can even be used in the smallest chapel or theater, the revolutionary instrument quickly found its way to Blues and Jazz players, like Count Basie. One of the first customers was Georg Gershwin. The movie song Tico Tico, played on a Hammond by the incredible Ethel Smith, became an international hit in 1944.

As soon as gifted rock musicians, like John Lord or Keith Emerson, got their hands on a Hammond, they created the sound, which leaves a monumental mark on the classic era of live and studio music.

While in the 1960s, almost 50.000 Hammonds lived a sacral life in churches and chapels, the trained organist Jon Lord employed the “hard rock” style on his instrument, even playing his heavy and fast keyboard riffs through a guitar amp. Inspiring legions of followers and setting the standard for modern keyboard players, not only the highly-skilled art of playing, but the original Hammond sound is still an object of desire.

Unfortunately the oversized originals require a regular and costly maintenance, including tuning and costly repairs – the additional LeslieTM speaker system is another reason for the loss of remaining hairs and money.

Around two million Hammond organs have been manufactured. The B-3 was the most popular and influential model, produced from 1954 to 1975. “Hammond gods” like Jimmy Smith, who invented the typical Jazz-organ sound, and Booker T. Jones in R&B, made it even more popular, than its predecessors. Furthermore it was used by nearly all legendary rock bands, including Deep Purple, and left its eternal fingerprint in numerous famous songs.

After countless attempts to bring the sound of the original B3 in an affordable digital hardware package, the B4000+ finally succeeded. Compared to the efforts to maintain a real organ and deal with the incredible weight, the B4000+ is simply a blessing.

(c) Hammond, B3 are Trademarks of Hammond Suzuki USA, Inc.

All product names used on this website are trademarks of their respective owners, which are in no way associated or affiliated with Ferrofish or Synthax Inc.